Have you ever experienced something strange in your life where you’re convinced that something existed when it’s not at all? Well brace yourself – Emojipedia said that the robber emoji never existed.

Emoji are something that is very close in our lives, and we use it almost every time we text someone else. It gives our text nuances – making it less formal and emphasizing emotions. There are over 3,300 emoji in Unicode Consortium, and we are convinced that the robber emoji is one of them – it’s not.

Regarding to this, experts have confirmed that the emoji never existed. Instead, it’s another Mandela Effect in our life. Mandela effect is a phenomenon in which a large group of people believe that something exists or occurred when it did not.

This began with a twitter user with a handle named @dinasimp uploaded her doodle of the robber emoji in her tweet, with a caption saying “I swear this emoji existed.” Many twitter users replied that they agreed – the emoji definitely existed and they saw it before. 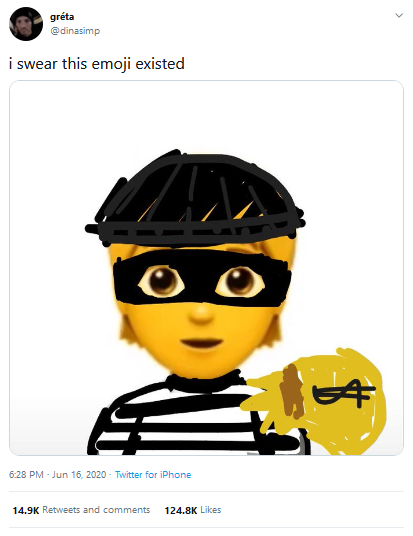 A user replied the tweet “I specifically remember using that emoji like 3 years ago in some stupid argument. WHERE DID IT GO”

Another user replied “did we all just collectively imagine this sh** existed??? Bcs I swear it did..”

However, @emojipedia quoted the tweet saying “This was never an emoji what is wrong with y’all.” Confirming that the emoji never existed at all. If you remember the emoji, it’s most likely that you’re experiencing the Mandela Effect as well. 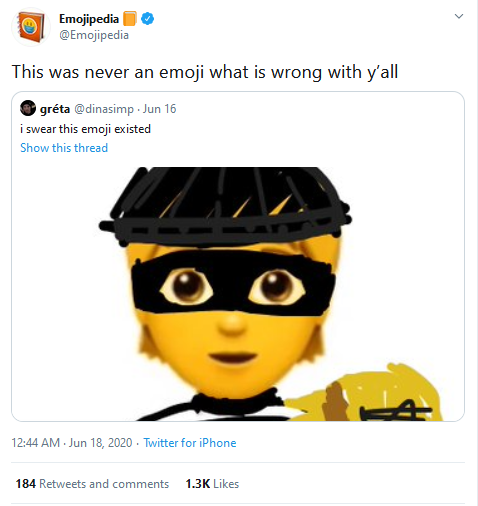 The account then replied to its own tweet, saying “are you talking about this animated emoticon in Skype” which is not similar to the doodle at all.

The range went further when @emojipedia then replied with an emoji of a supervillain using a purple eyemask and ninja emoji which hasn’t been released until later in 2020. The account also tweeted “Screenshot > memories” asking people if they have a proof of the emoji existing, which people were failed to find.

However, some users also said that it’s from bitlife, which is almost the same with the emoji doodled – but it’s showing a thief running with a sack of money instead.

Mandela Effect is rooted in false memory phenomenon, only that it’s shared with multiple people. This began when a self-claimed “Paranormal Consultant” Fiona Broom shared her false memory of the death of South African leader Nelson Mandela in the 1980s, when he actually died in December 2013. Many people then claimed that they believed the same thing - that he died in the prison. In fact, he was released from the prison in 1990 and died at the age of 95 in 2013.