How to Divide in Excel: Follow This Simple Tutorial!

Excel or Microsoft Excel is a spreadsheet program. It’s used to create grids of text, numbers, and formulas specifying calculations. Microsoft Excel is essential for a lot of people especially those who run a business, as Excel can be used to record income and expenditures, plan budgeting, chart data, and present fiscal result.

One of the biggest benefits of using Excel is that it’s really organized. It has the ability to organize a large amount of data into a spreadsheet and charts in an orderly and logical manner. This way, people who read the data from Excel would not find difficulties in analyzing or digesting the data to be transformed into a decision for, say, their next budgeting plan.

It’s even easier when it’s used to create graphs and other visual data representation. As the most prominent spreadsheet program in the world, Microsoft Excel has features that allow its user to do a mathematical operation with certain formulas and functions.

There are many mathematical formulas offered by Excel, such as sum, average, multiplication, and division. In this article, we will talk about how to divide in Excel, as in dividing numbers. Scroll down to find out!

1. How to divide in Excel: what you need to know Before we dive deeper into the steps on how to divide in Excel, you need to know some basics. Basically, there is no divide function in Excel, or we can say that Excel does not offer a special formula for dividing numbers between cells. You can simply use the forward-slash symbol (/) to divide numbers in Excel.

Don’t forget to start typing in the formula bar with an equal sign (=). So, a really simple example is you place your active cell in A1 and you type =10/5 in the formula bar, the A1 cell would show you the result of the division, which is 2.

2. How to divide in Excel: using more than 1 cell In cases where you have a number in one certain cell and wishes to divide it by another number in a different cell, you can also do the division operation in a really simple way.

Step 1. Click an empty cell so it would be an active cell. For example, you can place it in cell A3

Step 3. Press Ctrl on your keyboard while clicking the A1 cell. The A1 cell should be activated with blue border. The formula bar will also add A1 automatically after the equal sign.

Step 5. Press Ctrl again while clicking the A2 cell. Now, the formula bar should show you a formula of =A1/A2

Step 6. Press enter. The A3 cell will show you the result of the division. Since a number can’t be divided by zero, Excel will show you a message which shows that there’s an error on division operation with #DIV/0! in the cell where the result is supposed to be showing. This error message will also show when one of the cells (whether it’s the number you want to divide or the divisor) is empty. So, make sure you didn’t misclick while doing this operation.

Excel will also do the division operation even if it’s with numbers with decimals, so, you shouldn’t worry about it.

4. How to divide in Excel: the formulas 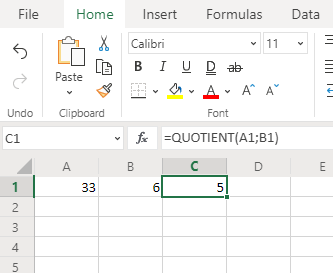 As we have mentioned before, you can simply use the forward slash sign to do division operation in Excel. But, there is a function related to division, which is QUOTIENT and MOD. QUOTIENT function will show you the integer portion of a division while discarding the remainder of a division.

With this simple example, here’s how you do it in Excel.

1. Click an empty cell to activate. For example, A3 cell.

3. Type QUOTIENT or MOD, depending on what you want to find.

5. Press Ctrl on your keyboard while clicking A1 cell.

7. Press Ctrl on your keyboard while clicking A2 cell.

9. Type enter. The result will show in the A3 cell.

That’s all about how to divide in Excel! We hope this tutorial works for you and help you with your spreadsheet.